Astrid – A Women’s Journey Of Carpentry

There is a distinct lack of women carpenters at Carpenter Oak (apart from recent arrival Nikki!) and in carpentry generally, so I find myself navigating through winding country lanes, through tunnels of moss covered forests, admiring where the January frost has kissed the landscape.  I am on my way to visit Astrid, a carpenter who works out of a small, farm based workshop on the outskirts of Moretonhampstead.  My initial reason for the visit is for Astrid to introduce me to peg making but as I was about to learn, there is a lot more to Astrid and her story.

Astrid hasn’t always wanted to be a carpenter, she started out studying as a Fine Art student in London but found the course wasn’t working for her.  Having left college, she needed somewhere to live so bought a van to kit out, only to realise she didn’t know how to make the bed or cupboards that she needed.

Prompted by her need to solve this problem she enrolled on an NVQ carpentry and joinery course, at the college of ‘Women’s Education in Building, London’ (unfortunately it no longer exists).  There, women were taught various trades; plumbers, plasterers, decorators, electricians…  The college worked with a partner organisation ‘Women and Manual Trades’ (now known as ‘Women on the Tools’).  It was through this partnership that Astrid was placed on building sites around London, working mainly on interior first and second fix carpentry; skirting, architrave, doors, stairs, kitchens and the like.

Frustrated by the repetitive nature of this style of carpentry, Astrid felt that there must be more to carpentry than what she was experiencing.  After researching green woodwork, Astrid helped out on some courses with Gudrun Leitz (based in Herefordshire) teaching chair making in the woods.  It was through Gudrun that Astrid started to learn green woodworking skills and made contact with timber framer Joel Hendry from whom she learnt most of her timber framing skills.

When Astrid became pregnant with her first child she and her partner Hugh went on an adventure to Spain and restored a ruin in the Catalan foothills of the Pyrenees, together with a group of Spanish people. After giving birth to her daughter in Spain, she and Hugh both became homesick and returned to England six months later.

Astrid remade contact with the timber framing industry but found juggling the demands of a baby and working full time weren’t realistic.  Hugh started to take on the work, he and Astrid job sharing until Astrid stopped working completely when her daughter got pneumonia at age one.  At the time she felt like her carpentry career was over and that her role as a mother was the only one she would have.

After the birth of her son, Astrid realised she missed carpentry too much, she loved carpentry and made the decision that although it would be difficult to balance work and family life she would find creative solutions to enable her to accomplish both.  Once her son was old enough to start preschool, she started peg making.  She was able to do it at times convenient to her, stopping and starting as time determined.

Astrid eventually stopped peg making as she felt it wasn’t financially or practically viable, her expanding company was too much to look after on her own.  Her new venture came in the form of Astrid’s House.  Astrid received some funding that enabled women who had experienced domestic violence to attend her carpentry course for free.  It was these women that helped to produce Astrid’s House.  The women who had been disempowered by past relationships were able to look ahead, learn something new and take back control.  Astrid is still in touch with some of the women, some came back for further courses as she was able to gain additional funding, enabling some of the women to become employed, and their self-esteem was greatly improved. 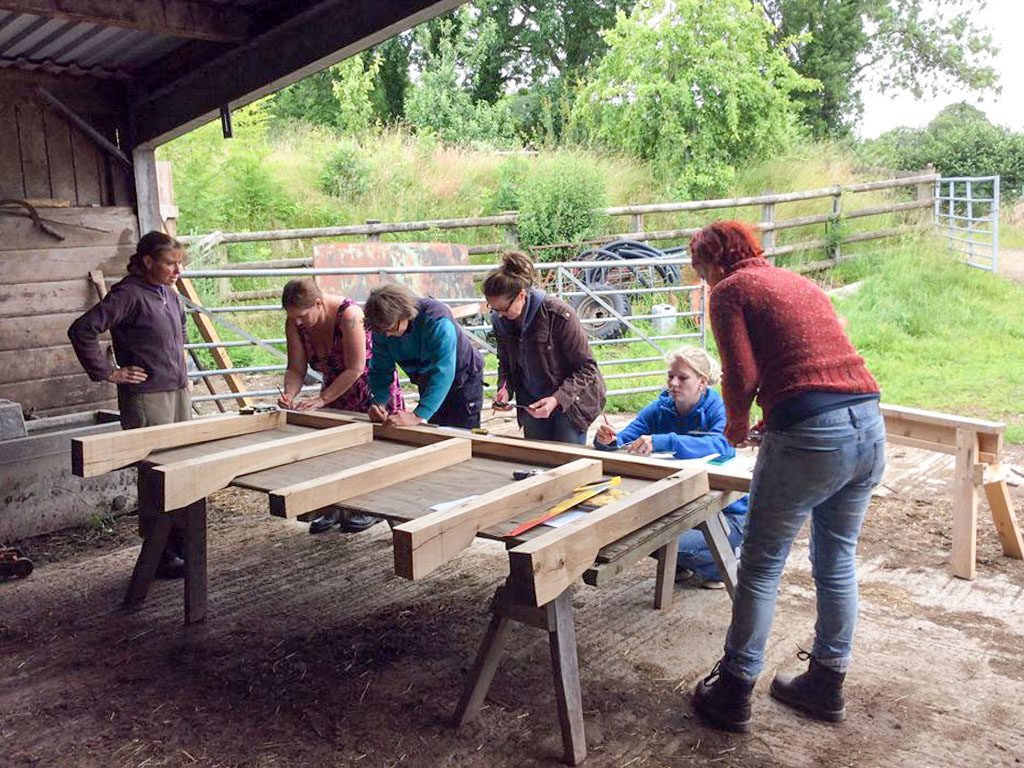 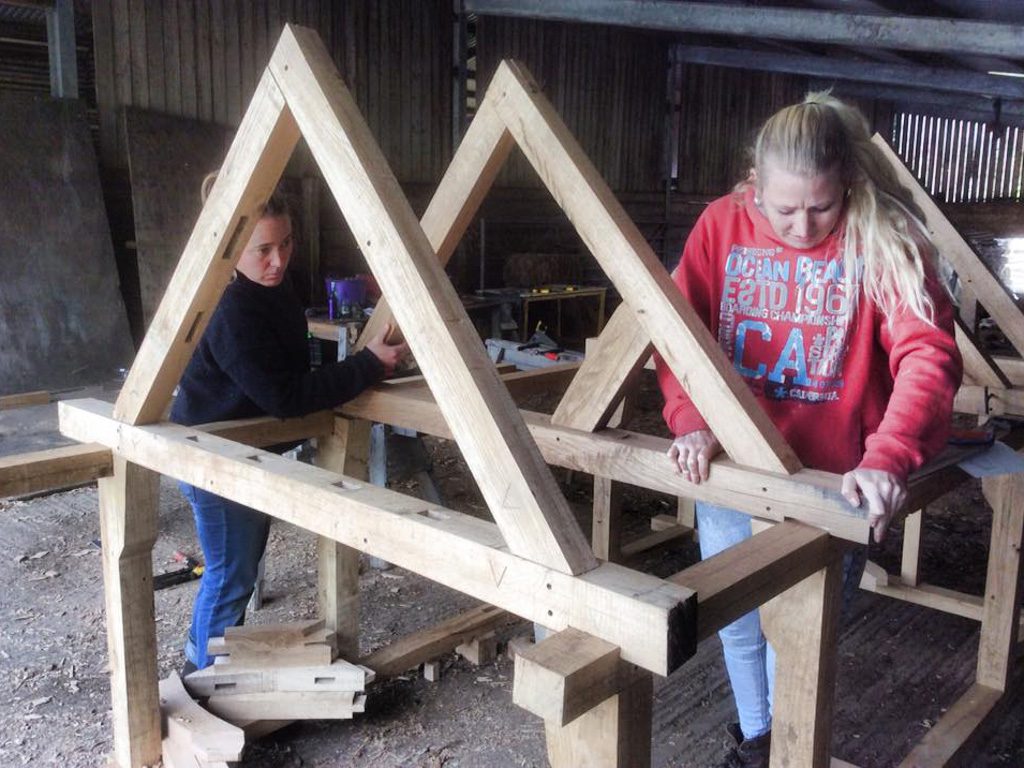 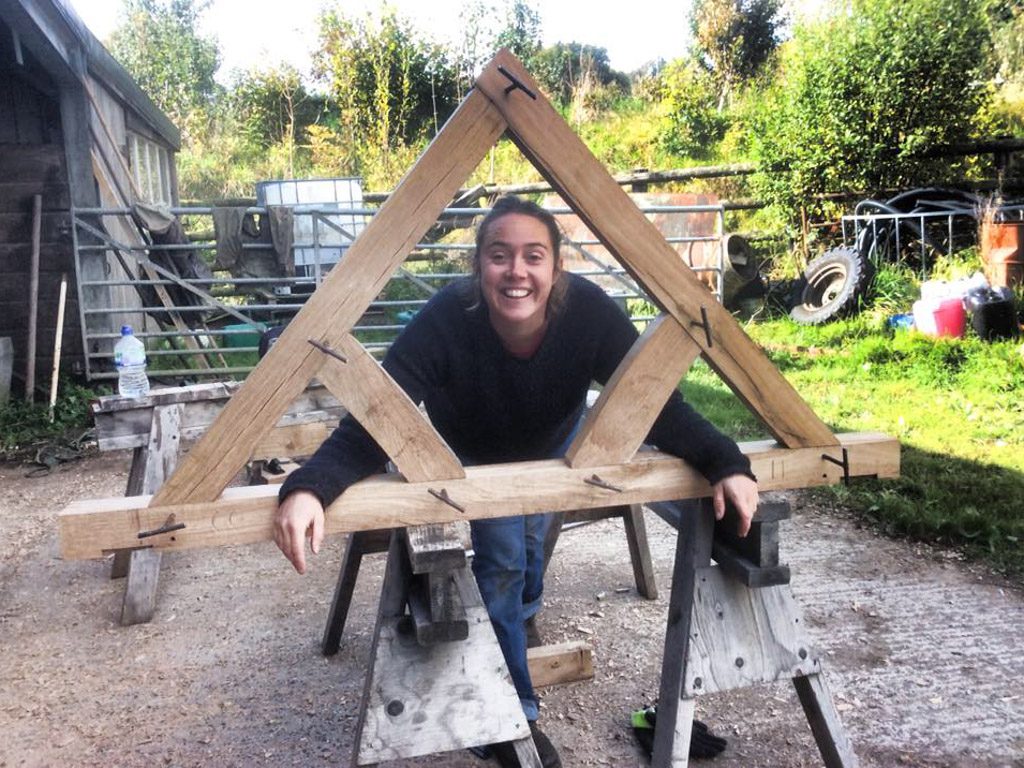 Astrid’s goal within her company ‘Touchwood Southwest,’ is to find creative solutions that reach out to women, which assimilate a woman’s lifestyle.  Her courses run at a variety of times throughout the week, from her workshop on the farm and at the Schumacher College in Dartington.  Astrid’s courses are so popular they are oversubscribed with waiting lists.  She feels the attraction is down to the course being for women, taught by a woman.  It is empowering for them to be able to solve practical problems by themselves.  The gender in carpentry seems to hold an importance and Astrid finds it beneficial for both the men and the women to be taught separately as it removes any pre-conceptions or judgement that each sex may hold.

The students make a variety of projects.  Astrid has taught green woodwork for military veterans, felling trees and making stools, rocking chairs, candle holders, whatever they wanted.  The women who attend the courses on the farm choose their projects making joinery based items such as stools, tables, swinging garden chairs, beds and bathroom cupboards.  At the Schumacher course, they make a set of shelves as it is a short six-week course.

Alongside offering carpentry courses for women, Astrid works in schools with Astrid’s house.  The house is used as a tool to teach children across a range of subjects in a one day task of erecting the frame.  The day begins by introducing the children to the subjects that are covered in the day, they are then tasked with a treasure hunt to point out where the subjects are found. Subjects included are maths, geometry, art, drama, history and teamwork.  Throughout the day, the children create drawings, read plans, erect the house, thatch the roof and weave walls.  They also study medieval paintings and talk about the history involved, included is the opportunity to dress up and be photographed with the completed house. 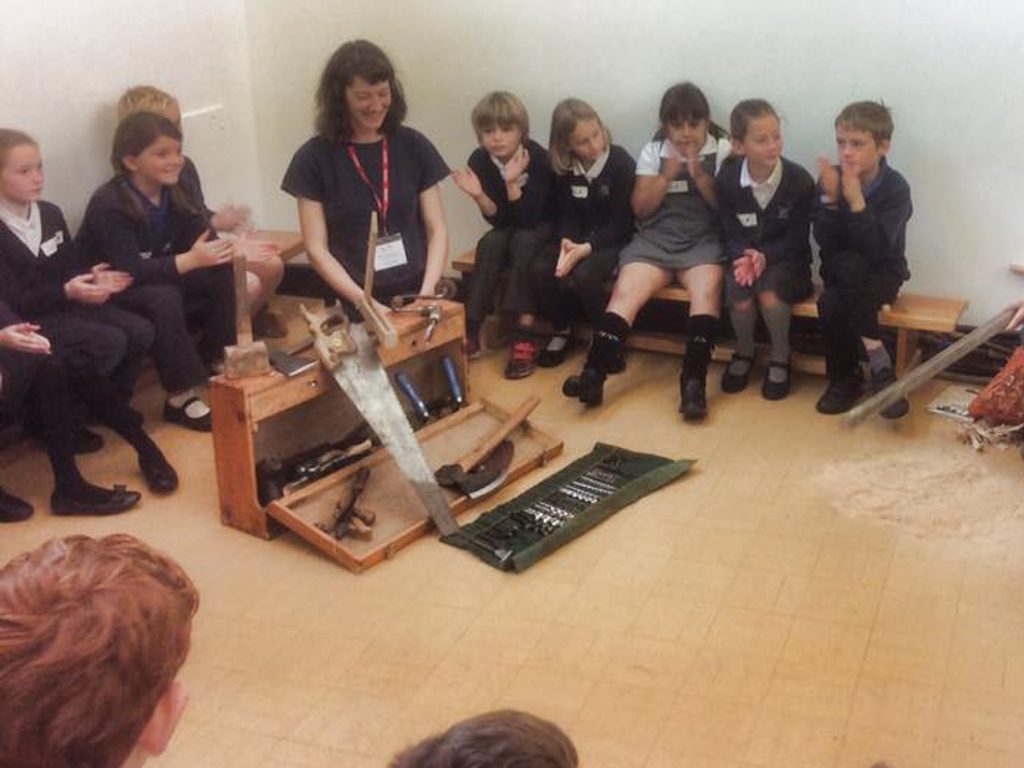 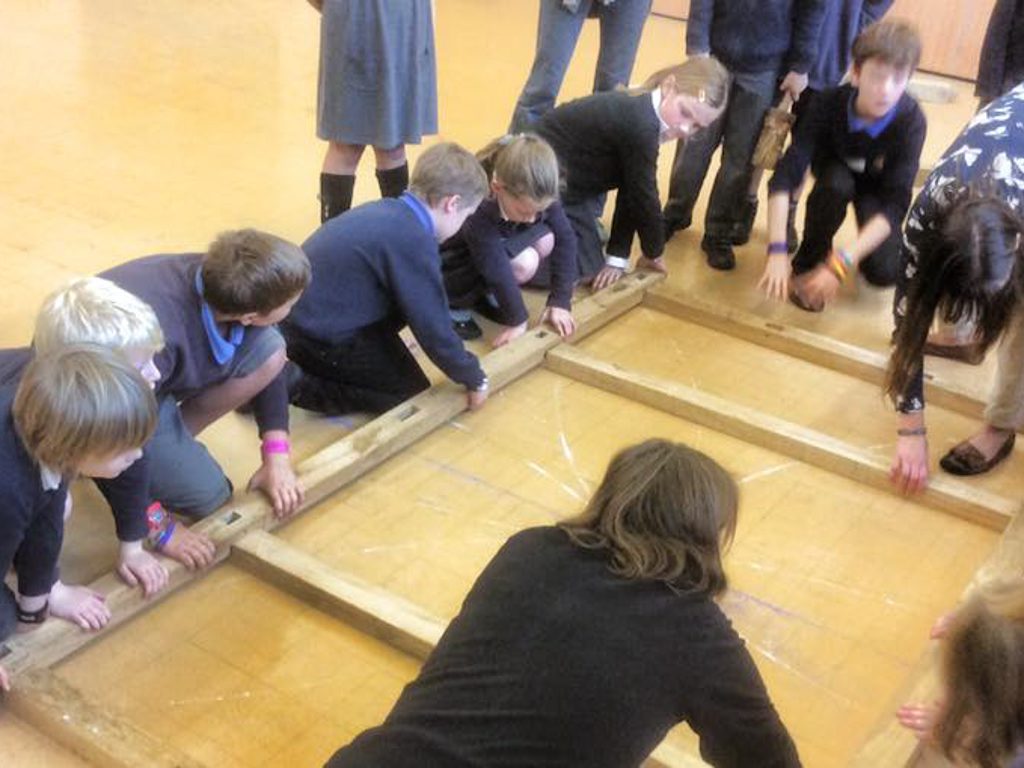 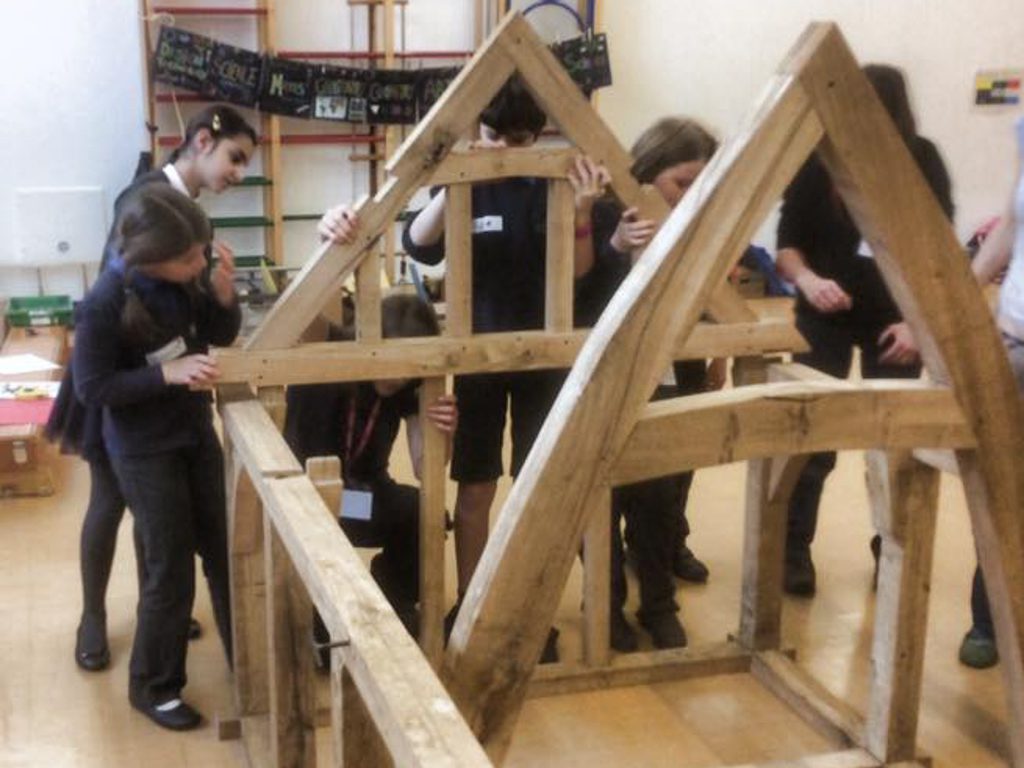 Alongside her teaching, Astrid works for private clients producing items such as fitted cupboards, bespoke shelves with detailing such as oak branches supporting the shelves, doors and even a small green oak porch.

Carpentry is empowering for Astrid and the women and children she teaches.  It started out as a means to an end but provided so much more.  It has given the gift of improving the lives of the women Astrid has taught, given them confidence, inspired them to create and allowed opportunities for working and family life to collaborate. Once Astrid started her carpentry, she never stopped.