In 2015, Purcell Architects won a design competition for extension of the chapel at the prestigious Radley College in Oxfordshire.

The existing chapel dates back to 1893 and was designed by famed Victorian architect Thomas Graham Jackson.  Since then, the increased numbers of pupils at the school as well as the building’s functional uses meant that one of the hubs of the college was often at full capacity.

Purcell’s design extends the east end to enhance the capabilities of the space and provide a focus on the Sanctuary, with 30% more seating overall.

‘The extension is a conscious continuation of Jackson’s design, whilst also having its own contemporary character and presence and is an important part of the school’s evolution and future. In addition, the architectural detailing, material selection, scale and proportion of the extensions have all been driven by the sense of design unity within the chapel.’  Purcell Architects

Carpenter Oak worked with Purcell in 2015 on Hexham Abbey and our involvement in the Radley College project began in 2017.  We immediately realised that this was no run-of-the-mill project.

The brief was to design an octagonal roof structure.  Chris Cotton of Purcell was inspired by a stone roof in the cathedral at Cordoba in Andalusia and wanted to re-create this in timber.  Carpenter Oak brought in the expertise of Rhys Brooks of Harrison Brookes Architects to help develop the geometrical principles for us to follow throughout this project.  Our design is 6.7m at its widest point, 4.7m tall and comprises over 12 cubic metres of oak, made up of 1177 sections including the sarking boards.  The finished frame includes 322 joints, including machining over half a kilometre of curves and backing cuts. 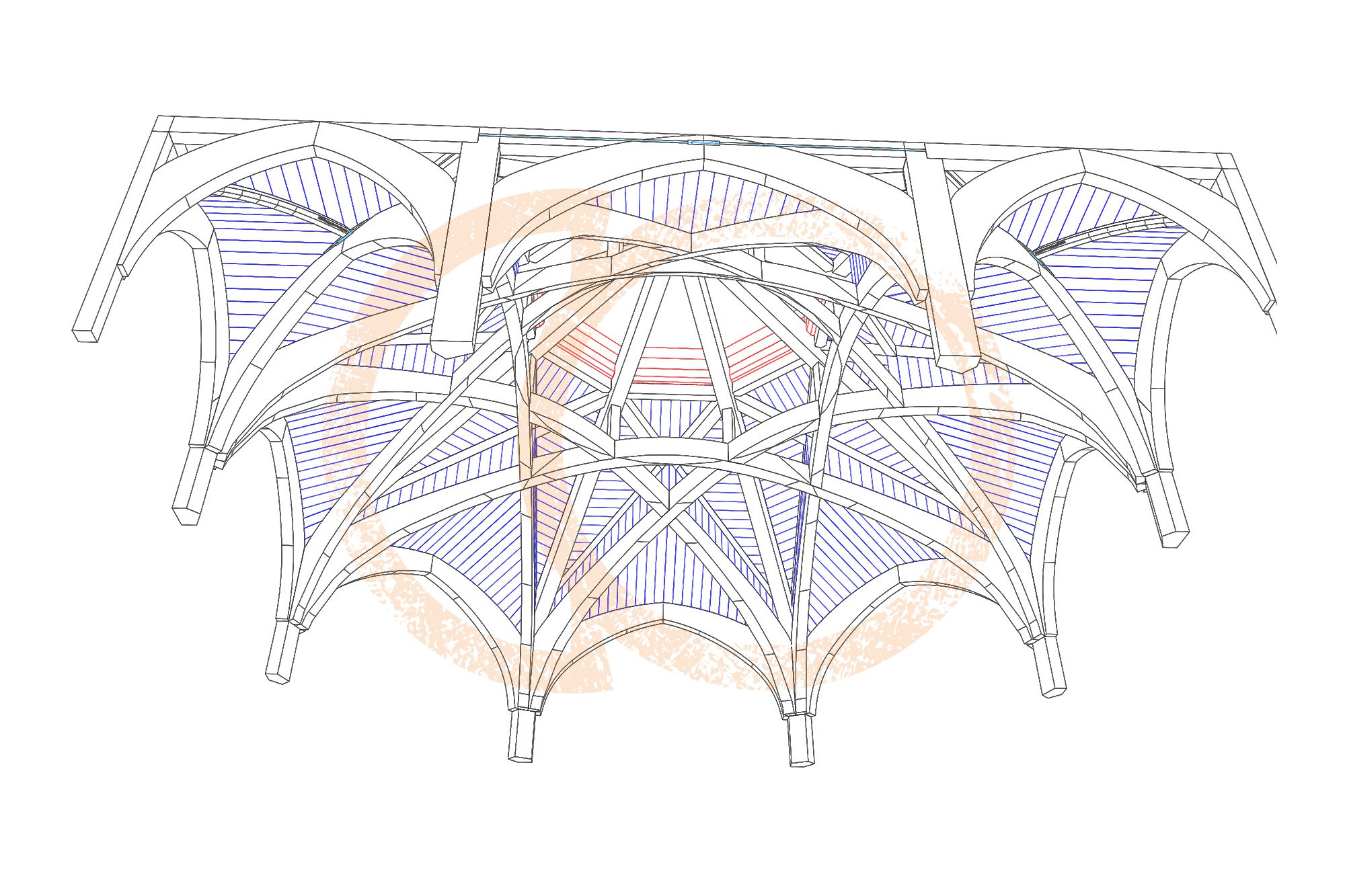 The differences between building in stone and timber imposed a different approach for us to follow.  The stone structure in Spain is working as arches whereas we could not design the structure to transfer any horizontal loads onto the masonry walls beneath.  This resulted in an octagonal wigwam structure with the curved timber suspended below.  The entire roof will be tied together with a 16mm diameter stainless steel strap around the perimeter of the octagon. 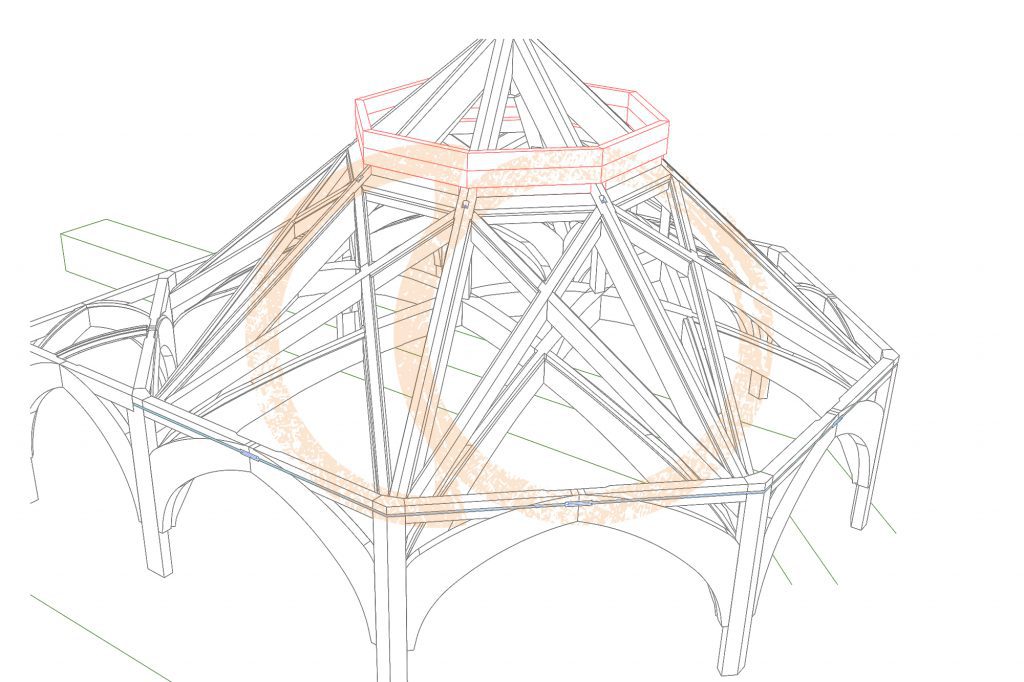 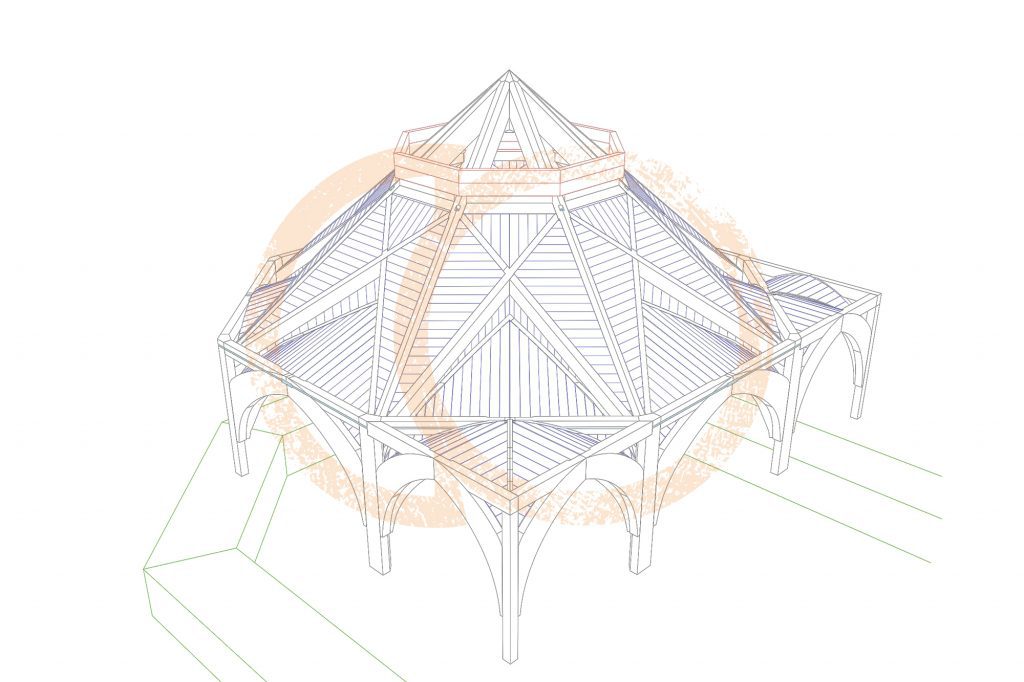 ‘In order for all of the joints to appear to form the dome from beneath the cross sectional shape of the timbers will have to be continuously changing across the roof leading to plenty of head scratching for the carpenters in the yard cutting the frame.’  Paul Slemmings, Frame Designer. 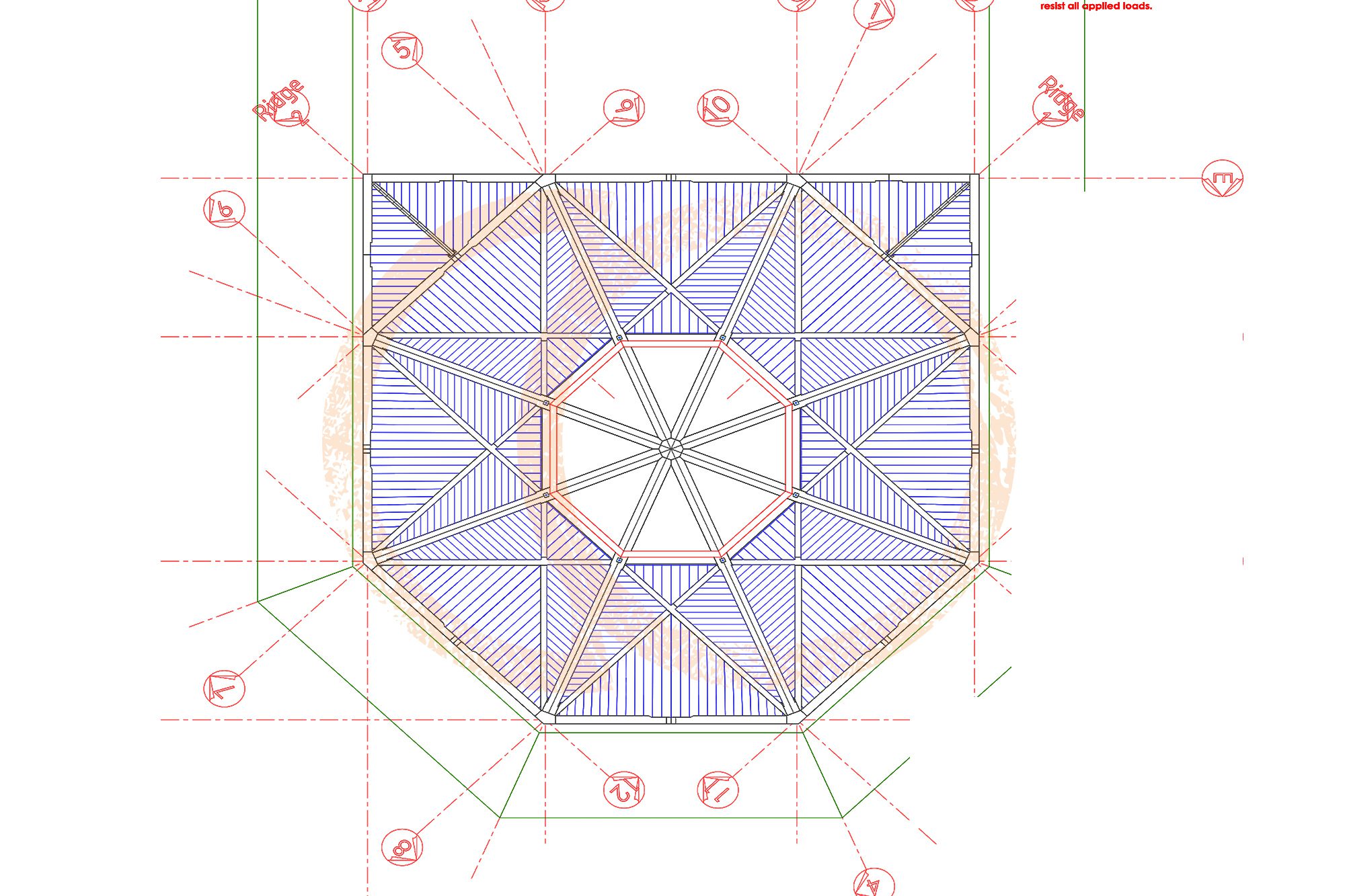 In July 2020, we started cutting the green oak timbers.  For most jobs, the frame is put together in 2D planes.  The Radley job was so complex, and given that we would be assembling it at a great height on site, we erected the frame as it would be on site, in our Devon yard, in 3D: 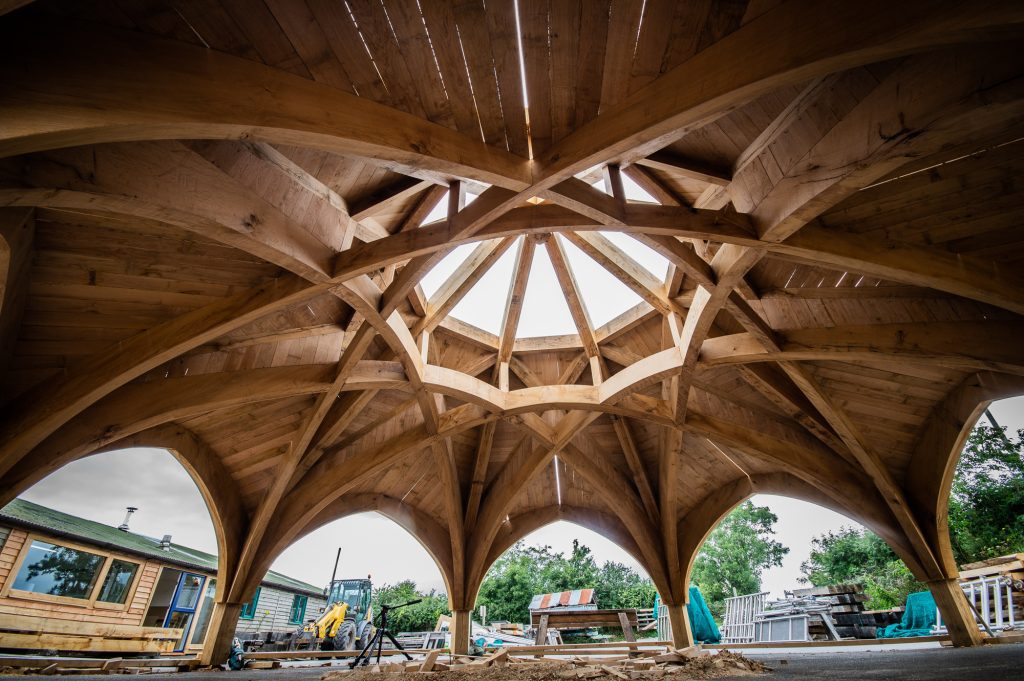 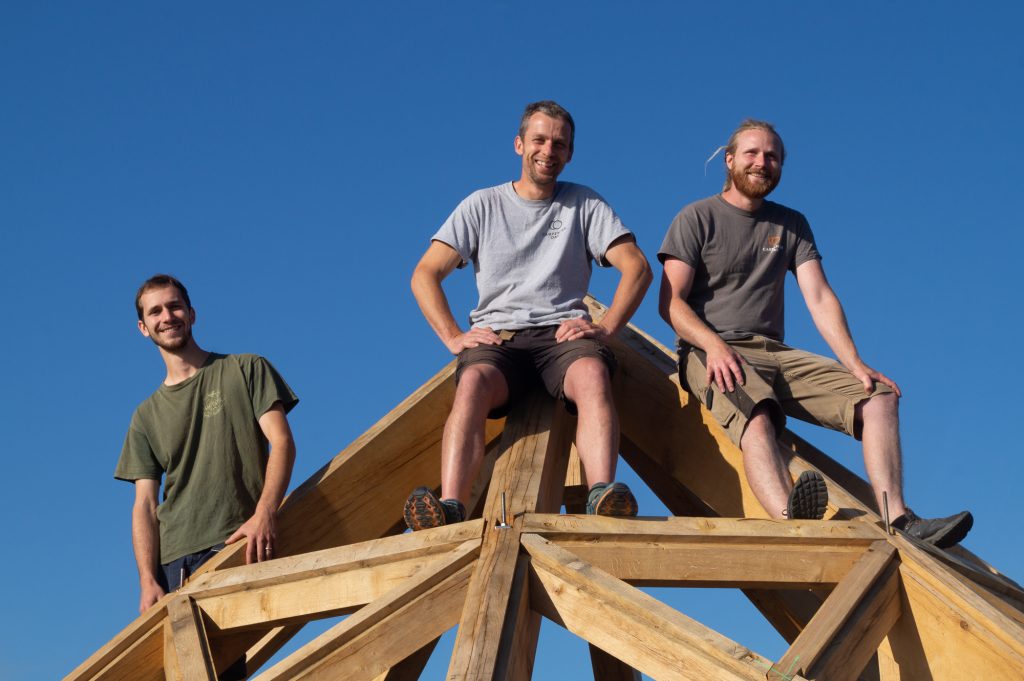 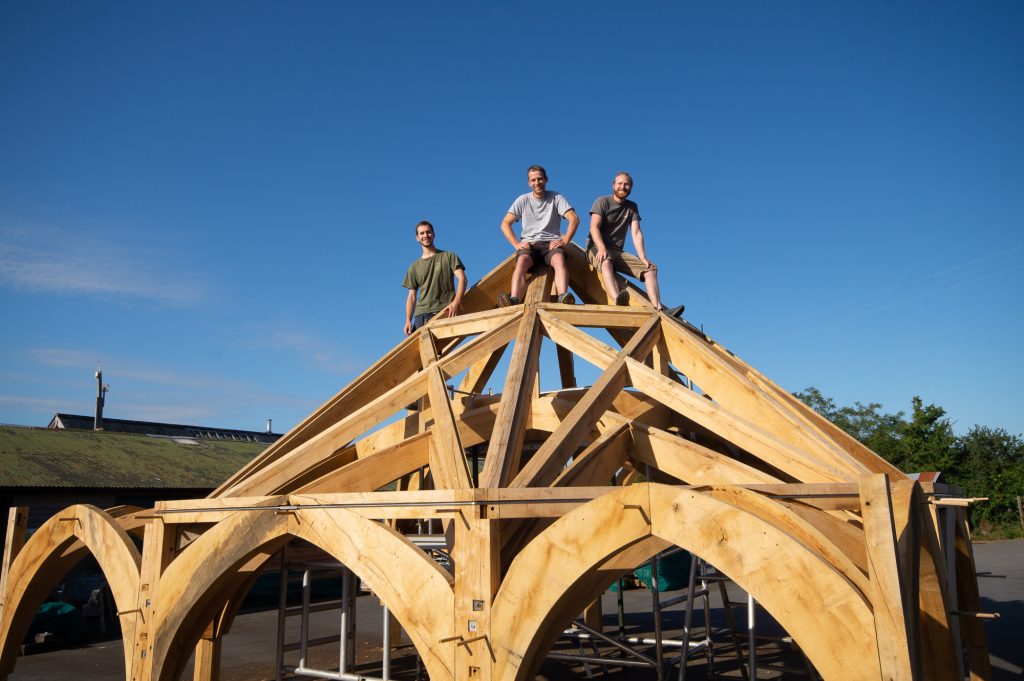 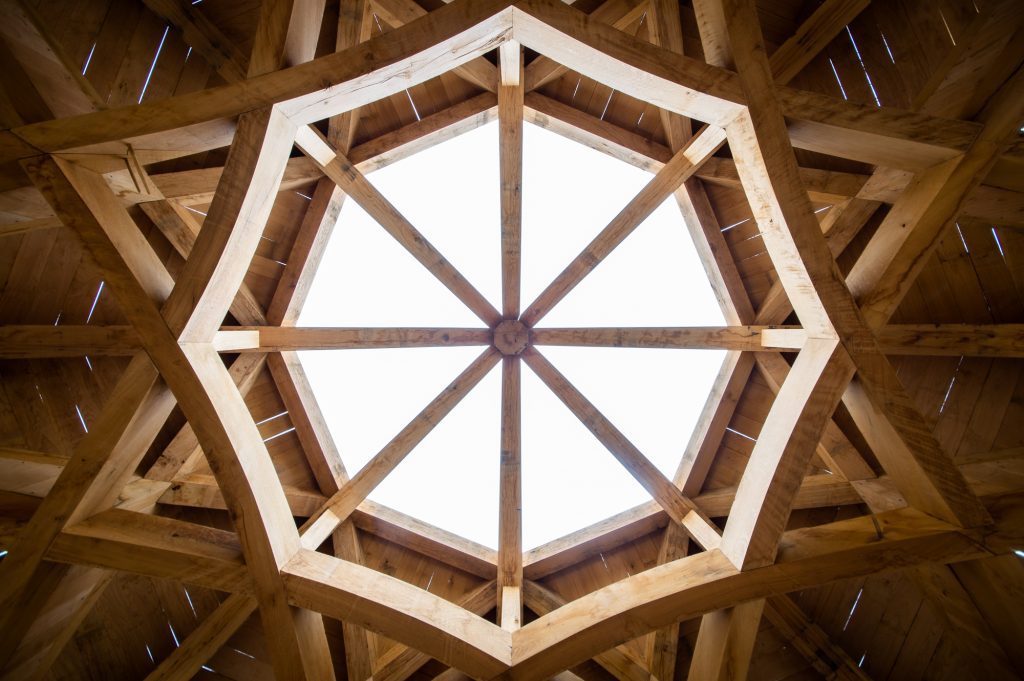 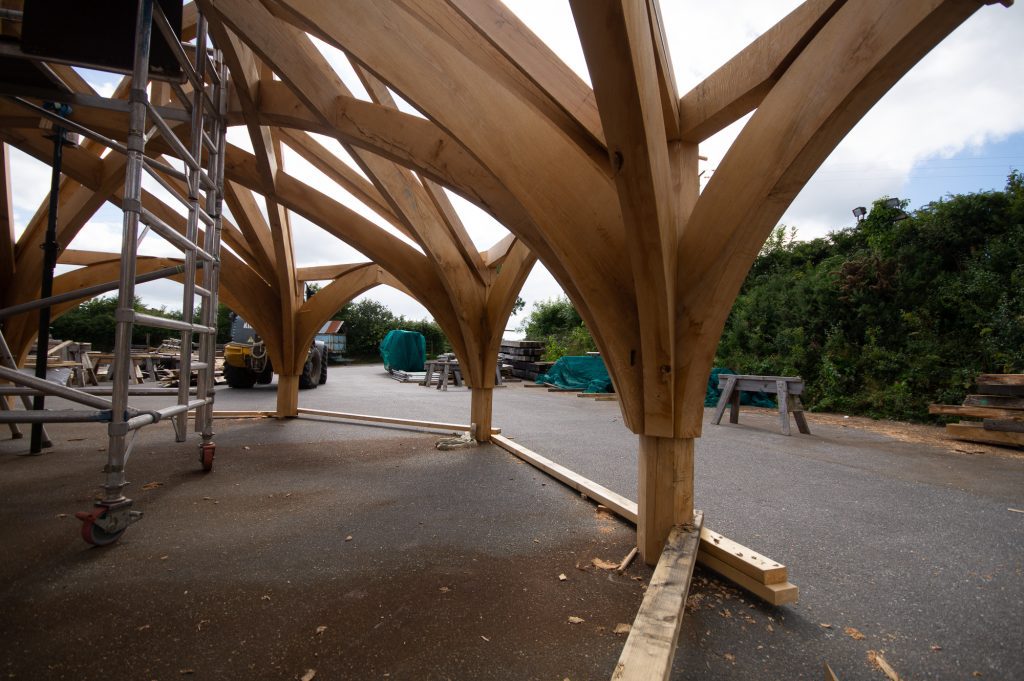 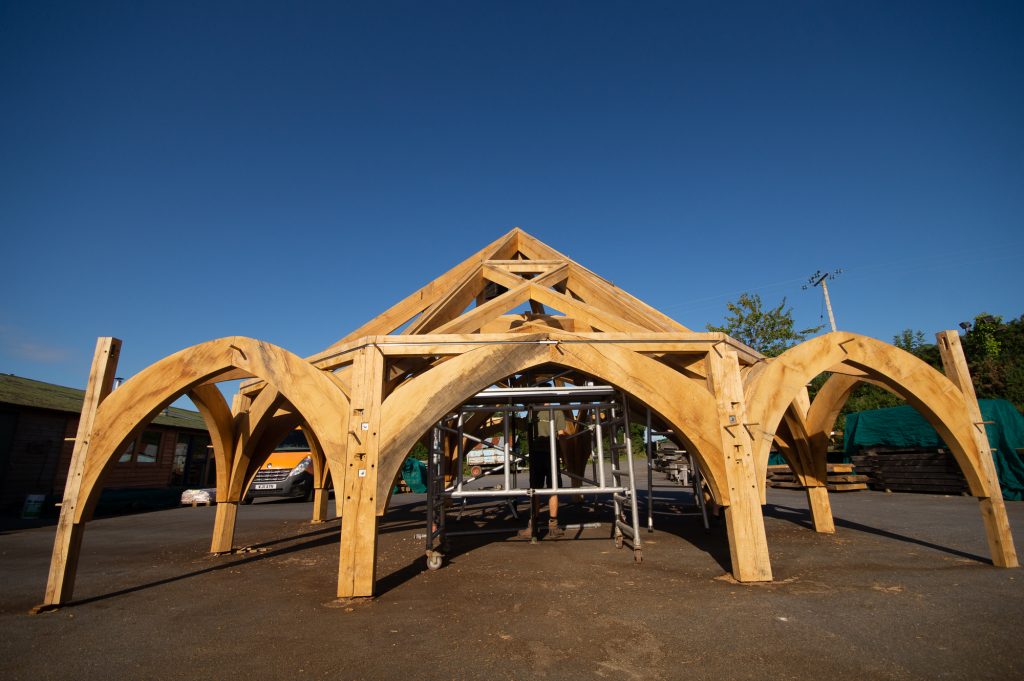 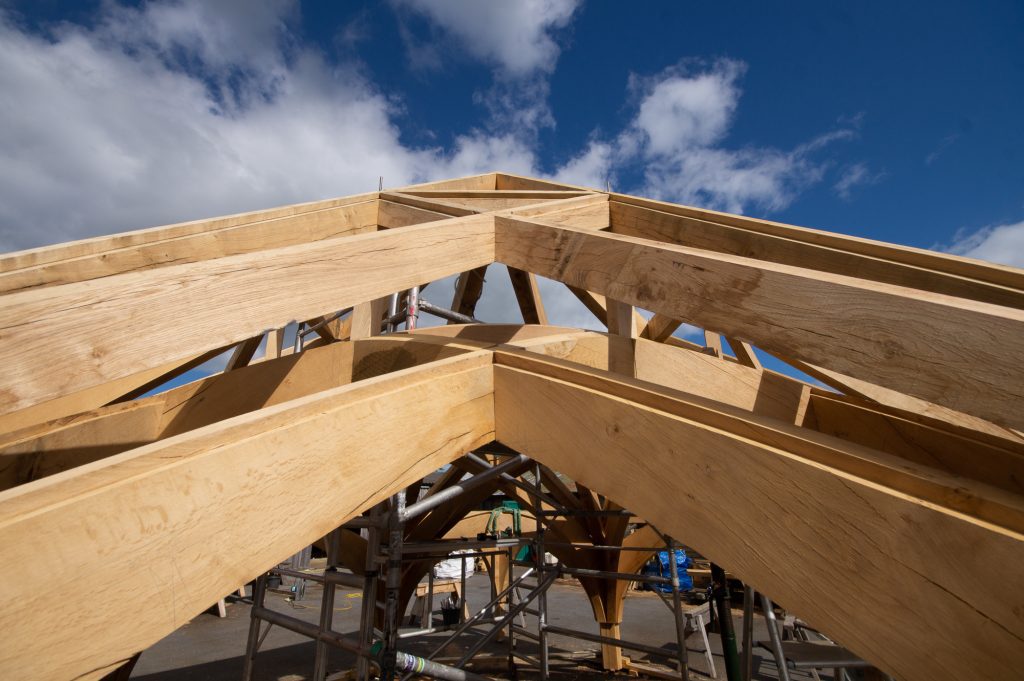 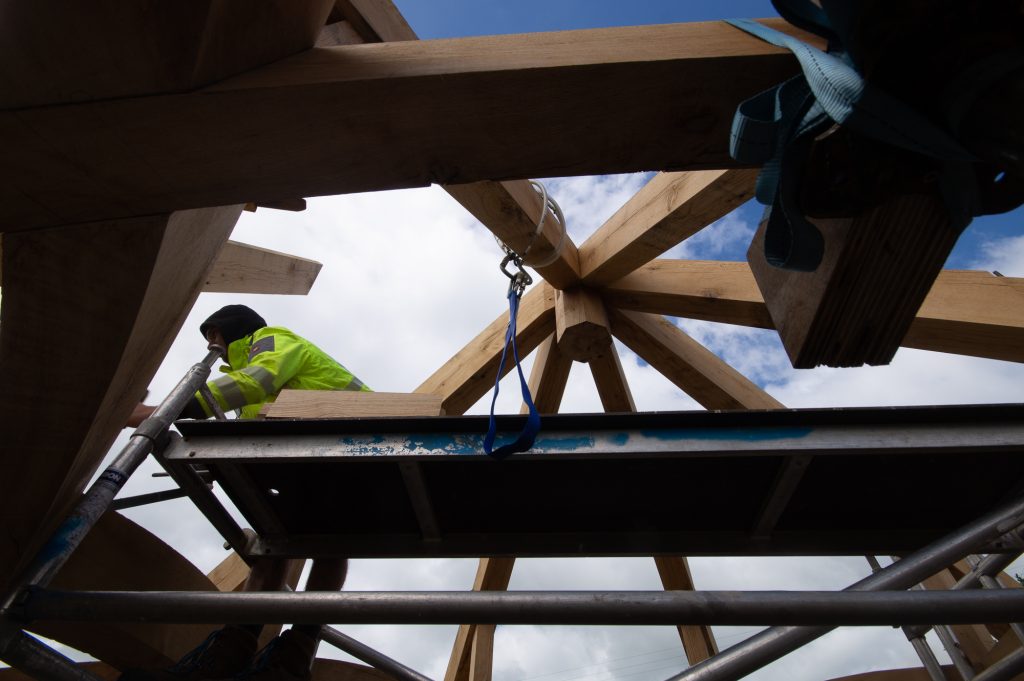 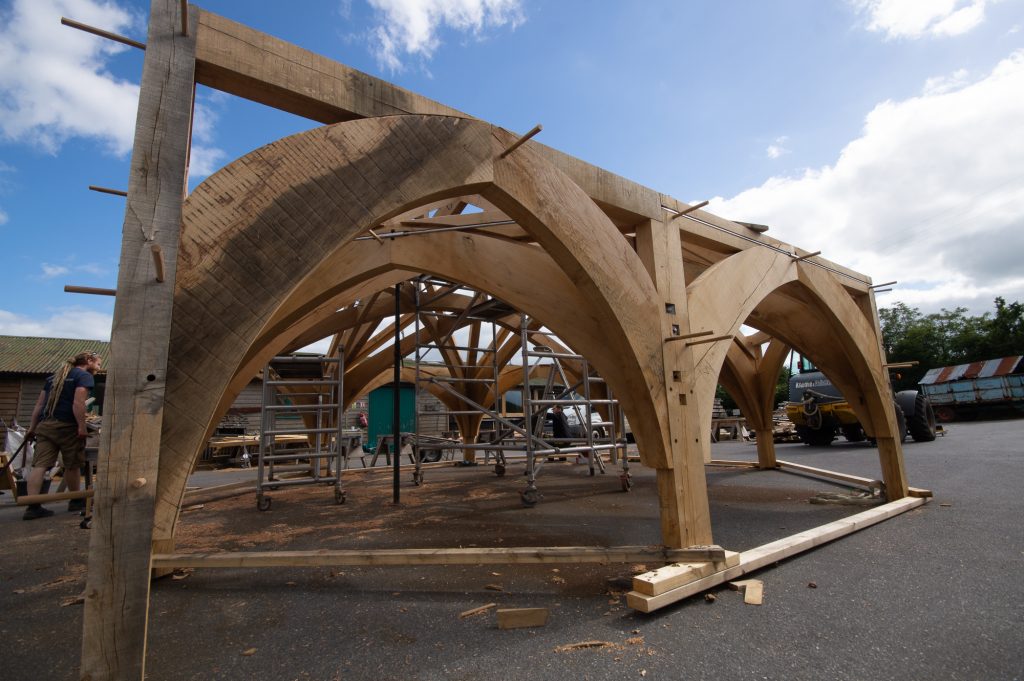 Once completed, Purcell Architects have created visuals of what the chapel extension will look like: 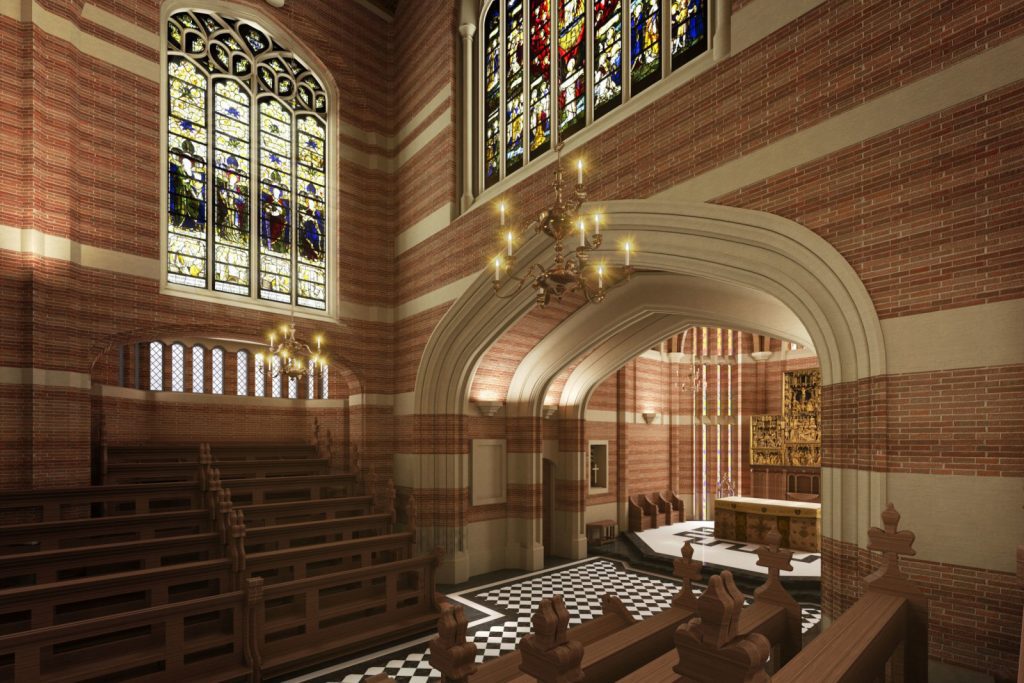 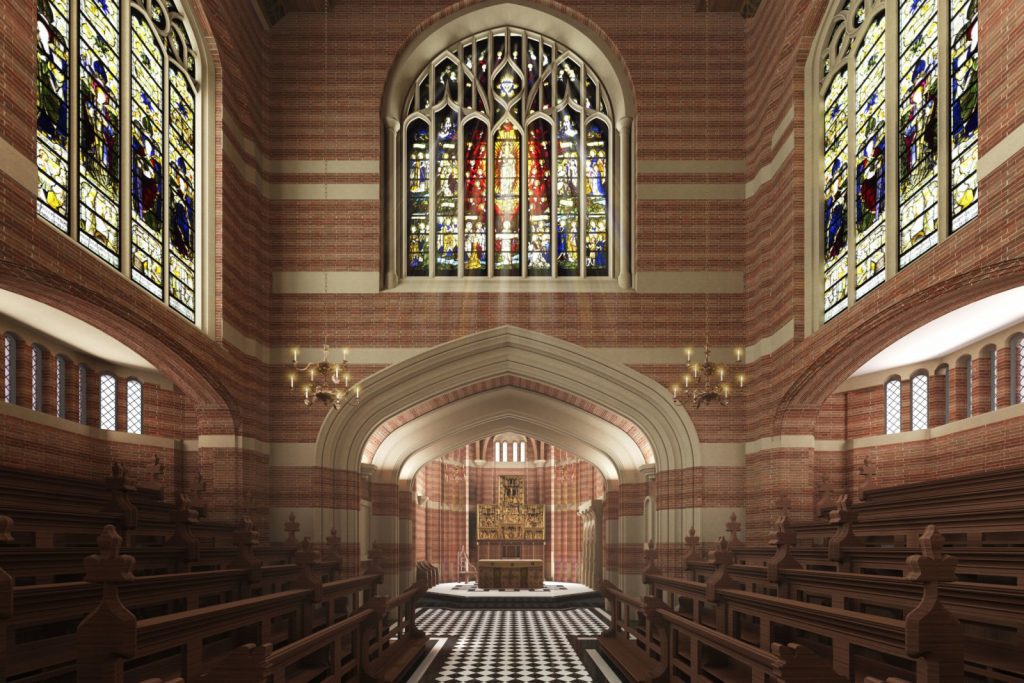 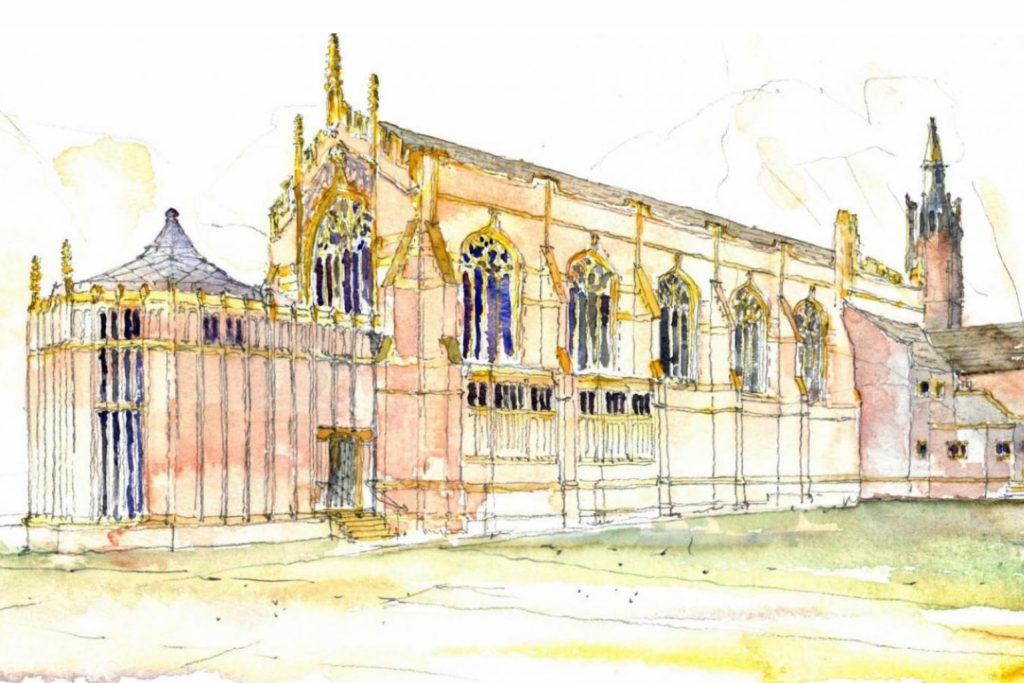 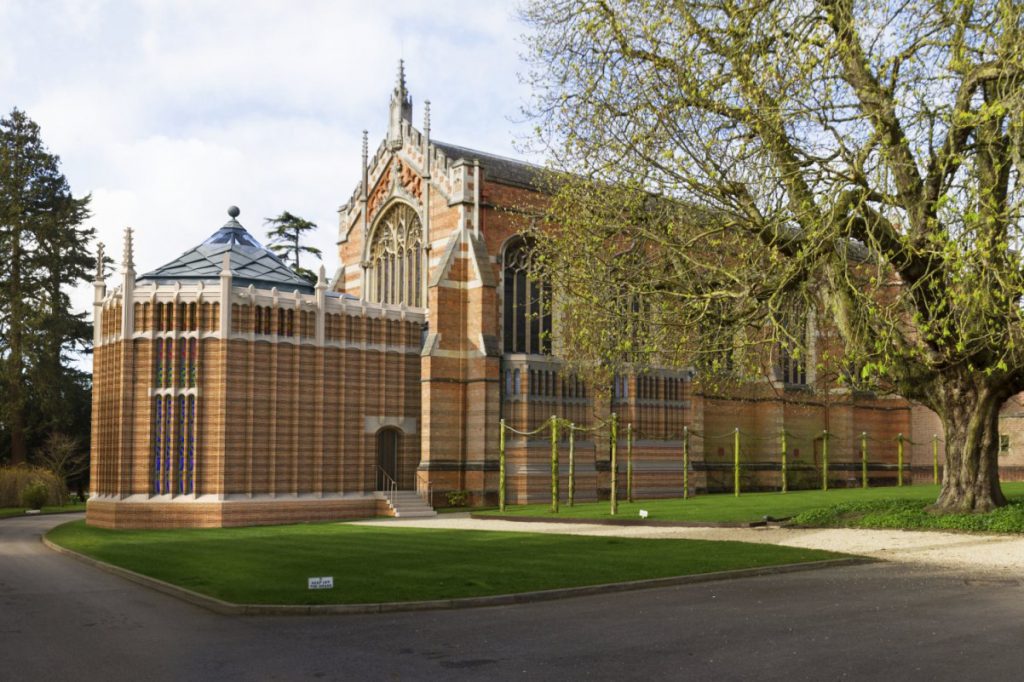 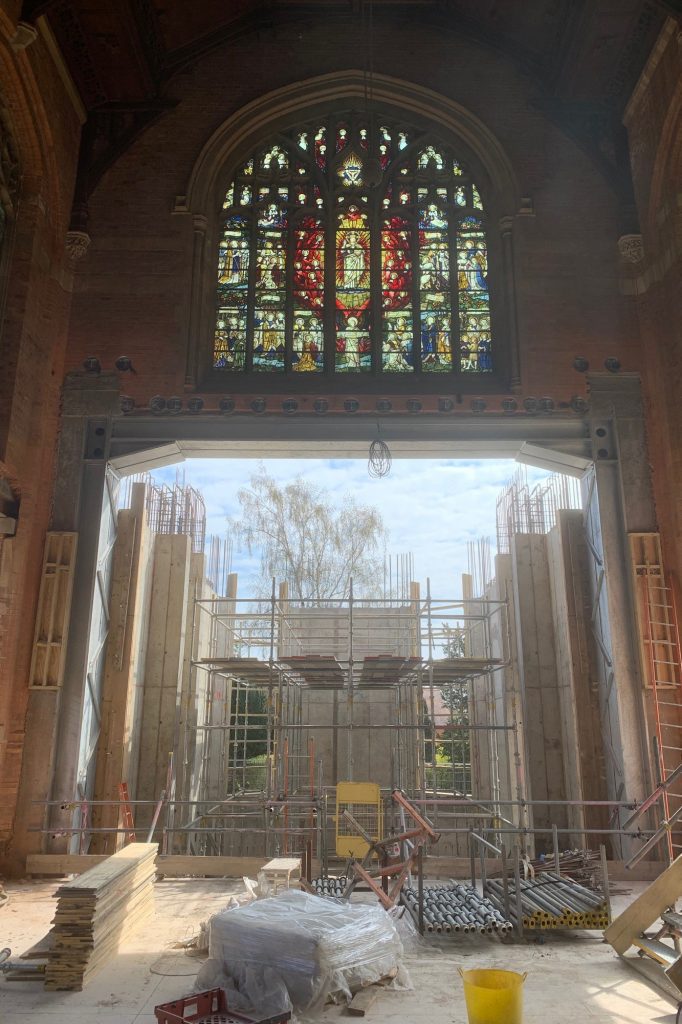 Watch Radley College’s video about the importance of the Chapel to college life and the development: