Carpenter Oak were contracted to fabricate the contemporary oak framed houses and erect them on the remote Island of Taransay.

Built for the BBC Castaway programme broadcast throughout the year 2000, this social experiment can truly be dubbed the template for the reality TV format of the early 21st Century – Big Brother aired in the UK for the first time in 2001.

Carpenter Oak were appointed to build 4 green oak ‘pods’, to house the 36 inhabitants on the remote island of Taransay, off Harris, in the Outer Hebrides.

Working in collaboration with Andy McAvoy of Blast Architecture, with whom we later built the Grand Designs ‘Long House’, the curved green oak roof was designed to hunker down against the Atlantic elements, and constructed to allow for dismantling and relocation at the end of filming.

With a strict completion date for the start of filming in mid-January 2000, the pods were erected in the depths of winter and through force 11 gales.

Programmed for erection just 6 months after our Scottish yard opened in the Summer of 1999, our Scottish team were busy finishing the historic Great Hall roof at Stirling Castle.

To meet deadlines, the frames were fabricated at our Wiltshire yard, then shipped to Stornoway, and onward to a carpark at Horgabost beach on the Harris mainland.

With no regular ferry access to the island, Carpenter Oak worked in conjunction with a local haulier to helicopter all materials to the island.

All the construction materials were organised into similar sized packs with strict weight limits, before being lifted by helicopter across the stunning Sound of Taransay, a 5-minute flight.

The helicopter was used throughout the build, to erect the frame and transport the site team.

Work on site began in December 1999; each pod was anchored to 9 pre-cast concrete feet, designed and engineered to be removable after filming.

These were located on rocky outcrops, to ensure minimal disruption of the existing landscape.

The plinths support three colossal oak floor beams, which were scarfed together from two pieces on site. The pre-fabricated curved green oak rafters were installed, forming the primary frame of the structure. Douglas fir panelling provides the secondary structure, and rigidity to the frame. The roof and walls were clad in plywood, and warmcell insulation fitted. Finally, a turf roof, blending the pods into the landscape.

Due to fly home for the Christmas break, our team were hampered by a severe storm which closed Stornoway airport. An emergency meeting of the local council was required to permit re-opening of the airport on a Sunday, in a community which observes the Sabbath. Permission was granted, and our team can lay claim to being on the first flight from Lewis on a Sunday in living memory.

Returning just after New Year, several of the Castaways were already on the island in the weeks before filming was to commence.

Among them Ben Fogle, who worked with our team; mucking in to finish off the structures, and providing our team with hot meals each evening.

In the Spring of 2001, in glorious Hebridean weather, the pods were dismantled and brought back to the mainland.

The concrete plinths were lifted and relocated to the beach on Taransay. The old schoolhouse is sited just above the beach, and at significant risk due to the erosion of the sand dunes.

An opportunity to recycle was spotted, and the plinths now form a protective restraining wall below the schoolhouse, ensuring its longevity.

The pods were relocated over the following years: two form an artist’s retreat near Cove, on the Firth of Clyde; one is situated at Luskentyre on Harris, within 2 miles of Taransay; the final pod lays on the Island of Muck, for former Castaway’s Dez and Liz Monks.

20 years on from a groundbreaking social experiment, reality TV may have had its day, but the Taransay pods live on. 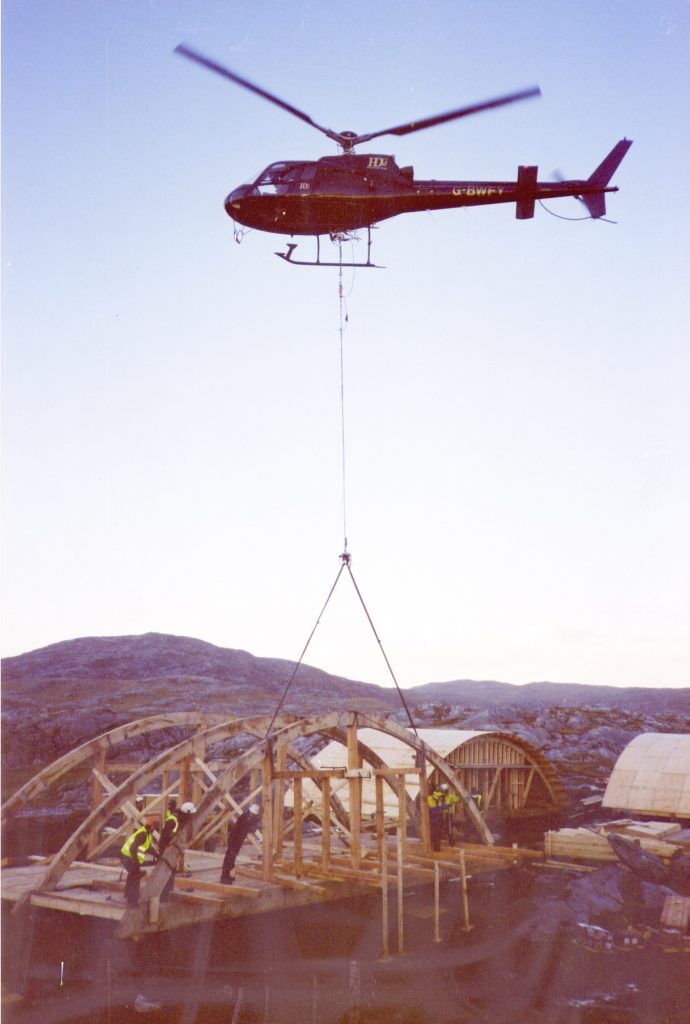 Conservation projects at the ends of the Earth

A traditional frame cleverly designed for a small space